A Quick Q+A regarding The Last Hero

1. WHY WRITE ABOUT HENRY AARON?

After my second book, Juicing the Game, the natural progression for my thought process was heading toward one question: “Who in baseball do you admire? Is there anyone this sport can be proud of?” It wasn’t simply the fatigue of writing about steroids and tainted heroes that drifted me toward Henry Aaron, but because the steroids scandal occurring during the same time as the housing/mortgage scandal removed from Enron told me something larger was taking place in this country, that the value systems we ostensibly seek _ honor, integrity, accountability _ were becoming almost quaint. In baseball, as the drug scandal intensified, players would tell me “If you ain’t cheating, you ain’t trying.” It was that level of cynicism that made me consider writing about someone who certainly was not perfect but had a larger mission for himself beyond money, that here was a person for whom those values are not quaint.

It took roughly eighteen months for him to agree to speak with me. I first began working on this project in May 2006 and that was in the middle of Barry Bonds nearing Henry’s record. Henry Aaron wanted nothing to do with the Bonds record chase. He didn’t want to be asked questions about Bonds, did not want to be placed in the debate about anabolic steroids. He did not want to engage at all.

When Henry’s attorney, Allan Tanenbaum, and I spoke for the first time, he was extremely pessimistic about the book and the public’s reaction to Henry Aaron. He was convinced that the public did not care about him except in being positioned as the polar opposite to Bonds. He was certain that I was only interested in one thing: Bonds. Over many phone calls spanning several months, Allan finally acknowledged (the key conversation taking place over Thanksgiving 2007) that my motives for writing the book had nothing to do with Bonds and everything to do with a man I considered to be an American icon.

A few months later, on January 31 (ironically on Jackie Robinson’s birth date), Henry Aaron and I had our first phone call. He was extremely pleasant and engaging, but echoed Allan’s sentiments about his own life. “People don’t care about me,” he told me. “They only care about what I did as a baseball player. There’s more to me than that.” I was amazed at the considerable divide that existed between the enthusiasm I received whenever I mentioned the possibility of writing about Henry and what he considered to be the public’s perception of him.

In the end, he was cooperative but clearly was ambivalent about the book being written.

3. WHAT MOST SURPRISED YOU DURING THE WRITING/RESEARCH?

There were many surprising aspects of the research, which is why I truly love to research and write books. Whatever your initial thoughts of your subject are will invariably be altered the deeper you learn.

I was as guilty as anyone in following the accepted Aaron myth: played in Milwaukee, was always overshadowed by players in bigger markets, snuck up on even the shrewdest evaluators of talent from the day he entered the big leagues to the day when suddenly it was he and not Willie Mays who was in the best position to break Babe Ruth’s all-time home run record.

None of this is true, and that was the most surprising thing. Henry Aaron was a phenom, a top prospect from the day he joined the Indianapolis Clowns. He was a comet, tearing through each level in the minor leagues and when he arrived for his first spring in Bradenton, Florida 1954, all eyes were on him to be the next great player.

The myth came later. As the Milwaukee Braves fell in the standings at the beginning of the 1960s, people did begin to forget about Henry, and he quietly accumulated Hall of Fame numbers. But that was only because the public lost interest in a losing team, not because it was unaware of his enormous ability.

4. WHAT IS THE LASTING LEGACY OF HENRY AARON?

The famed sociologist told me during an interview that the steroid scandal has created a gap between the record holders and the standard bearers of major league baseball. Barry Bonds is a record holder. Henry Aaron is a standard bearer. The latter is far more important and valuable than the former.

And it carries weight beyond the baseball diamond, where Henry always wanted respect. He spent his life being compared on the baseball diamond to Willie Mays, but what Henry Aaron wanted to follow in the legacy of Jackie Robinson, to use his platform to provide opportunities for people who did not have them. Baseball was simply a means to that end.
at April 30, 2010 No comments: Links to this post

The official publication date of The Last Hero is Tuesday, May 11, which means, naturally, that there are finished copies of the book floating around the world now, April 29. A friend told me he purchased the book at The Strand bookstore in the East Village in New York.

So, things are happening. I will post here a list of events, happenings, anecdotes and such along the book trail, and will check in frequently anyone has thoughts, questions or comments.

Today's news: An excerpt is  confirmed for ESPN the Magazine.
at April 29, 2010 No comments: Links to this post

At Broadside Bookshop in Northampton, talking about The Heritage. Full house, great questions...sold a bunch of books, too. Bonus! Thank you... 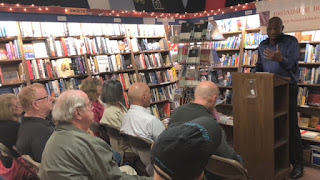